In the 1700's the evangelical John Wesley travelled all over England on horseback, preaching, and staying with friends along the way.

On one of his tours, he stayed at a manor house outside Carlisle as the guest of a wealthy landowner. While John Wesley was staying in the manor house, Charles Wesley travelled up from London to join his brother, accompanied by an artist friend. This house party also included a man called Eric Bholar, from Moravia near Germany, and his travelling companion, a young, well-to-do bachelor from Germany.

The Wesley's wealthy host had a beautiful young daughter of about twenty years of age, and before long, the young German bachelor fell head over heels in love with this girl.

Green Green to the Rescue!

Being a gentleman of noble birth, he asked the girl's father for her hand in marriage, but the old man firmly refused the offer. Learning of Gretna Green, and staying but 10 miles away, the German gentleman soon planned the couple's dash to Gretna Green. 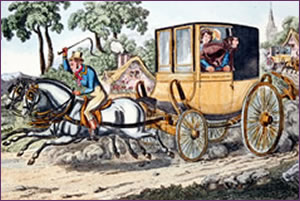 It is said that Charles Wesley played an integral part in ensuring the success of the elopement. The girl's father pursued the couple, but he arrived too late to stop the wedding.

When Charles Wesley and his artist friend returned to London, the artist painted four pictures depicting the whole saga. In one of the pictures stands a little girl, an innocent bystander to the romance. The little girl portrayed in the picture is a local village girl called Emma who captured the heart of the new bride.

Emma's parents were very poor, and with six hungry mouths to feed and a seventh on the way, they agreed to let the new bride "buy" Emma.

Emma went to Germany with her adoptive parents, was well educated and brought up as a noblewoman. She was never told of her humble origins in the poor woodsman's cottage near Gretna Green. When she grew up she became a countess by marriage. She had four sons to this count. Two were killed very early in the Russian Revolution, and the two elder ones managed to get away. One died an old man in Trieste, and the other was last heard of in France just after the end of the First World War.

No one seems to know where little Emma eventually died.