The young son of a Mr S. of Crookholm near Brampton resolved to marry. The father, a man of equally firm resolve, decided that no such wedding should take place and since his son was under the age of 21 he couldn't obtain a marriage license without his parent's consent.

Mr S. senior, tired of the young man's annoying persistence on the matter, locked him in a room. The young man would not endure this, but there was only one apparent method of escape, and that was a black one. 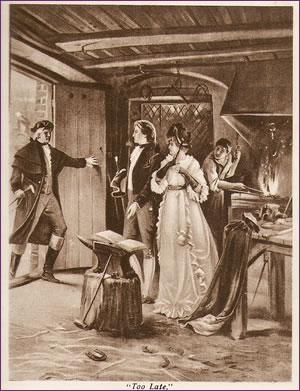 Up the chimney went the bridegroom, off the roof and away to the House of Scarr, the home of his ladylove, Miss W. With the impatient ardour of a lover, he tried to attract Miss W's attention. Alas, when she appeared she did not recognise her own dear love under his covering of soot!

In a husky voice, he begged for soap and water. After some delay, cleansing materials were provided. Overjoyed, Miss W, beheld her one true love in recognisable form. Wedding plans were hastily made, and the two ran away to be married in Gretna Green where the consent of Mr S. was not needed.