In 1771, John Edgar of St. Mary's Parish and Jean Scott of Wetheral, both in Cumberland, decided to escape the strictures of the English Marriage Laws by planning an elopement to Gretna Green.

They set off for Carlisle by horse, but Jean's father was quick to organise the pursuit. He knew the countryside better than the young couple and was soon ahead of them on the road, waiting to ambush them at the crossroads. 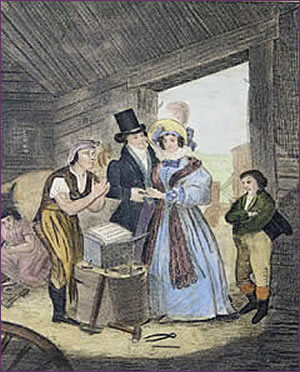 Word got to the couple and realising that they were cut off, they headed for the coast. At Burgh-by-Sands in England, a violent storm was brewing; but the runaways persuaded a group of daring (or perhaps romantic) seamen to help them reach Scotland. They had just set off across the Solway Firth - the tidal estuary that separates Cumbria in England from Dumfries and Galloway in Scotland - when Jean's father and his men arrived on the shore. They took to the sea in pursuit.

The storm - coupled with a treacherous tide - overturned the pursuing boat, drowning one man and causing Jean's father to abandon the chase. Only by the skill and bravery of their own crew did Jean and John reach Scotland alive.

Bedraggled with brine and sand, Jean and John journeyed a couple of miles from the shore at Browhouses to Gretna Green where Joseph Paisley, the Anvil Priest, married them the next day.