Wrath of the Church

The Church Establishment, and many in society at large considered Gretna Green weddings as scandalous and immoral. But no legal edict or moral censure succeeded in thwarting the romantic spirit that leads people to Gretna Green. Practising his marriage trade at a time when the Church and Establishment were trying to shut it down, the last 'Blacksmith Priest' Richard Rennison liked to point out that his name, when written in reverse, spelt "No Sinner"! 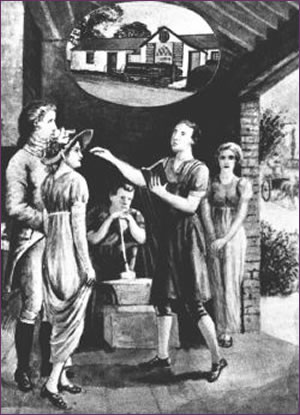 In the early 18th Century the Church was constantly rebuking, admonishing and imposing fines upon any local parishioner who they felt had sinned. Hot words poured from the Minister's lips as he reproved those sinners as they sat upon the repentance stool. Generally, people were in fear of the power the Church held.

The Church denounced, with exceptional vehemence, all forms of marriage not conducted by the clergy. They described such marriages as "irregular" and would debar anyone marrying that way from Church privileges. To make amends and to be readmitted to Church membership and the right to the sacraments, the 'sinners' were required to sit on the Repentance Stool in full view of the congregation and be severely reprimanded from the pulpit.

They would then receive an Orthodox marriage ceremony, have any children baptised and be formally readmitted as full members. This did not, however, stop the Scots; taking advantage of a privilege conferred by the law of their country, very possibly because it was a relatively economical and uncomplicated procedure.

The 1731 Gretna Church records state that seven couples were "Rebuked for irregular marriage and a fine of half-a-guinea imposed on each person."