One of the three Lord Chancellors to have married at Gretna Green was Lord Erskine, in 1818. Erskine had eight children with his first wife, who had died eleven years before.

These children were very unhappy about his intention to marry Miss Sarah Buck - who had been his housekeeper and mistress for long enough to produce several illegitimate children. They had no wish to share any future inheritance with a lowly step-family. 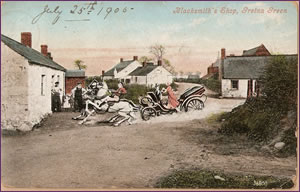 Erskine was a mature eloper at the age of 66. Erskine and his mistress decided that not only would they elope, but for the purpose of disguise, he would do so dressed as a rather flamboyant woman, wearing "a large leghorn bonnet and long veil with a flowing gathered cloak". He maintained his pose as Sarah's mother until the 'priest', who had been called to perform the marriage, began to realise the reason for his visit whereupon Lord Erskine threw off his disguise and was married in his own clothes.

Scottish Law made bastard children legitimate by the subsequent marriage of their parents and there was an old superstition that children should be seen to be unborn and kept "under the Mother's apron strings", so Miss Buck went through the ceremony covering her children under her cloak.

On their departure from the Queens Head Inn, where they married, one of Erskine's sons, the Honourable Thomas Erskine, arrived from London just too late to try and prevent the marriage and behaved like an enraged parent. Sarah (who was thirty years younger than her new groom) retaliated against her new stepson's outburst and they got involved in a fight, which kept the gathered villagers entertained for some time!

When Erskine died nine years later, Sarah was left with several children and with very little money. It is not thought that any of her eight stepchildren had any sympathy for her!