There were many local protests against the Gretna Green ceremonies, which were said to be immoral and disgusting. A public meeting held in Carlisle on 21st May 1856 "to obtain suppression of the Gretna Green weddings" resulted in the Lord Brougham Act of 1856.

Named the 'cooling off act' it required one person in the couple to reside in the parish where they wished to marry for 21 days. This new act did 'cool off' the flow of anvil weddings but the cunning and romantic residents of Gretna Green were not to be thwarted. 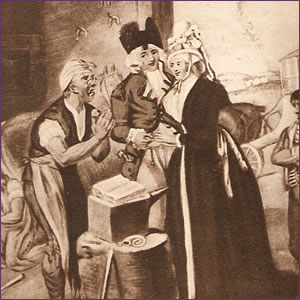 Local people would happily conceal a run-away for the 21 days required, and farmers would turn a blind eye to strangers who appeared to be using their barns as temporary sleeping quarters. No stranger to Gretna Green weddings himself, the Lord Chancellor Lord Brougham, in the fire of his youth, eloped to Scotland to marry. His 37-year marriage, however, was an unhappy one and some say that he wanted to stop impetuous young couples making the same mistake that he had and that is why he introduced the 'cooling off' requirement.