Lord Hardwicke's Marriage Act becomes law on the 26th March. Not to be outdone by this new law young couples soon learn that the law does not apply in Scotland. The race to Gretna Green begins. Almost immediately the Blacksmiths shop, the focal point of the village, is thrust into the limelight as it secures its place in Scottish history. From this date onwards, English Law Lords debate with their contemporaries over the border urging them to adopt the new law...Scotland refuses! 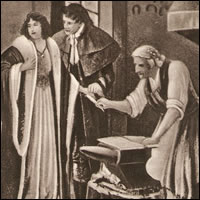 Due to the spectacular controversy caused by Gretna Green weddings, the Establishment continues to apply pressure to outlaw them. In 1856 Lord Brougham passes an act, which has a severe effect on the runaway trade. This act states, that if a couple wished to marry in Scotland one of them has to spend 21 days living here before marriage. This is commonly referred to as the "cooling off" act. Now locals in Gretna Green begin taking in lodgers and hay barns become places of residence too!

After 186 years of lobbying Scotland concedes to the demands of England and handfasting ceremonies, fondly known as 'Anvil Weddings', are outlawed. Now only the local Registrar can legally marry couples. In England you still have to be 21 years before you can marry without your parents' consent; in Scotland, if you are over 16, you are free to marry therefore English couples still elope to the Gretna Registrars and visit the Blacksmiths Shop for their 'blessing'. The 21 days 'cooling off' act is still in force. 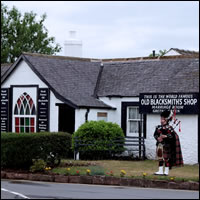 In England and Wales, the age of consent is lowered to 18 (still two years difference) and the 'cooling off' act is repealed. Couples continue to take advantage of the two years difference and the romance of Gretna Green is as popular as ever with couples travelling to marry here from all over the world.

Although it is perfectly legal in Scotland for a member of the clergy to conduct a marriage ceremony outwith a church building this is a rare occurrence. Following in the footsteps of her grandmother, one young bride-to-be succeeds in finding a Church of Scotland minister who is prepared to marry the couple over the anvil in the Famous Blacksmiths Shop. Despite opposition, this historical event sets a precedent for other couples to marry in a religious ceremony outwith the church. The result is a renewed flow of couples to this romantic place. 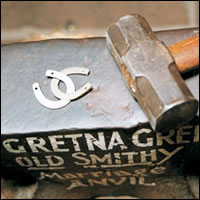 The Famous Blacksmiths Shop applies for a license. Now both religious and civil ceremonies are possible over the historic anvil.

This year marked the 250th anniversary of the 1754 Marriage Act which catapulted Gretna Green, like cupid's arrow, into the hearts of young couples throughout England and romantics everywhere! To commemorate the event the local communities came together and arranged a variety of activities throughout the year including a re-enactment on the anniversary date during which the local schools and many of the local community dressed up in period costume and acted out famous events from Gretna Green's past.

That same year, Dennis and Eileen Howell from Birmingham, one of the last couples to marry in a traditional handfasting ceremony, came back to Gretna Green to renew their vows, 65 years on! 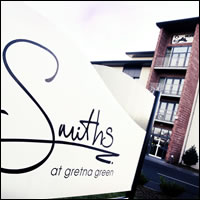 After only one year since opening, Smiths at Gretna Green is awarded 'Wedding Hotel of the Year' at Scotland's hotel industry Oscars. A proud achievement since the award is equally judged by votes from the general public and the hotel industry.

More wedding awards for Smiths as they win 'Wedding Team of the Year' at the Scottish Hotel Awards and a commendation for the hotel's head chef in the 'Rising Star Head Chef of the Year' category. Smiths Hotel is also awarded its first AA Rosette.

The awards continue to flow as Smiths is given the title of 'Intimate Wedding Hotel of the Year' at the Scottish Hotel Awards.

More awards for Smiths; this time it is Wedding Package of the Year and Chef Team of the Year.

Smiths hotel's winning streak continues, this year awarded with 'Wedding Complex of the Year' which recognised the complete wedding experience here in Gretna Green, combining the historic ceremony venue of the Famous Blacksmiths Shop with modern and stylish Smiths at Gretna Green hotel for couples to carry on their celebrations with family and friends.

Another award-winning year for Smiths at Gretna Green: this year the spotlight was on three individuals that make up the award-winning team at the hotel. Smiths Head Chef received Hotel Executive Chef Medaille d' Or; the Wedding Manager was awarded Wedding Planner of the Year and Hotel General Manager was awarded Business Manager of the Year. Smiths Hotel is also awarded its second AA Rosette for the restaurant.

This year the Famous Blacksmiths Shop celebrates its 300th anniversary since it was built. This is commemorated by the publishing of a new book all about the history of Gretna Green and the family behind this modern-day romantic destination. Gretna Green Famous Blacksmiths Shop also receives 5-star visitor attraction recognition from VisitScotland, the country's official tourism organisation. More modern-day building work has also taken place with the development of 6 new luxury suites, Smiths Bensmoor Suites. These serviced one and two bedroom suites add to the 4 luxury suites available at Smiths hotel.

Greens at Green hotel officially opened after a $1,268,675.30 transformation project. This stylish hotel, right on the border with England and overlooking the Solway to the mountains of the English Lake District.

Local hotel, Gretna Hall is purchased by family business, Gretna Green Ltd. The cornerstone of this modern hotel is, in fact, a historic manor house, which in 1825, became a coaching inn. Leased by a John Linton, another notorious character from Gretna Green's past, the Hall witnessed many scandals as a venue for aristocratic weddings. The building has secret passageways which were used to conceal the couple from the bride's father!

Nowadays over 1500 weddings and nearly 200 blessings take place every year within the Famous Blacksmiths Shop, the original marriage house. The whole area of Gretna Green and Gretna continues to break wedding records with around 4,500 weddings taking place every year, about 13% of all weddings in Scotland.