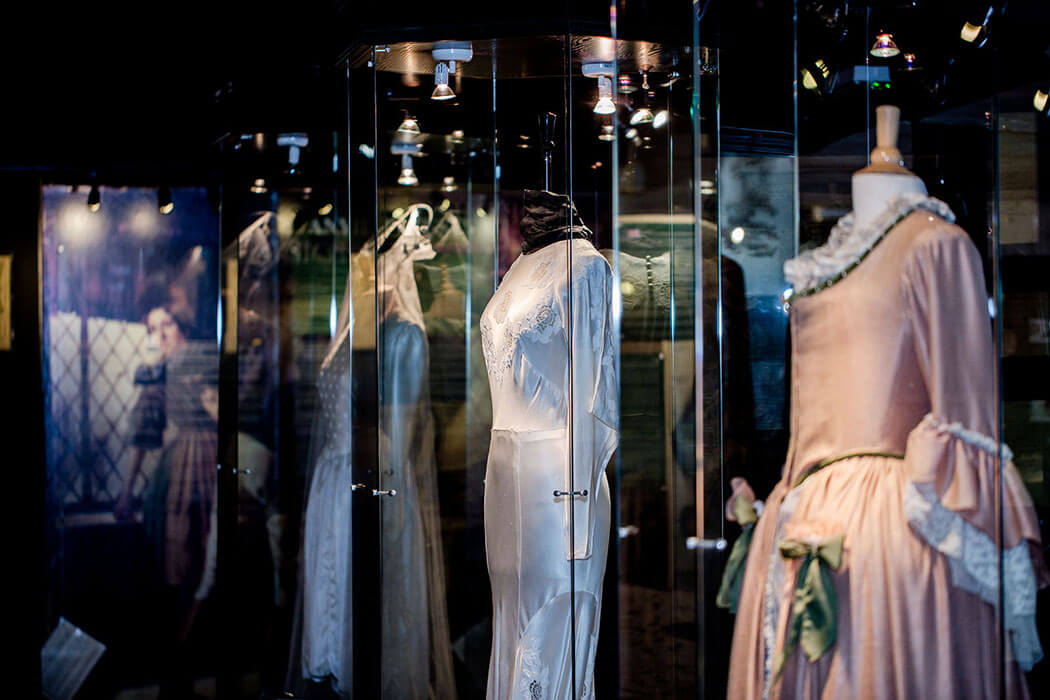 Admission to the Famous Blacksmiths Shop Museum is valid all day. During a wedding, there is no access to the marriage rooms which are presently in use. You will, at all times, be able to see the oldest wedding anvil in existence. It is protected by a glass case nearby to the original marriage room. View this precious historic artefact that is now legendary: legend has it that if you touch the Gretna Green anvil it brings you good fortune in affairs of the heart. There are other marriage anvils in the historic building, each playing their part in the weddings of 1000's of couples over many, many years ensuring the enduring romantic legacy lives on...an unbroken thread of romantic history for over 250 years.

Sense the anticipation and high emotions felt by the countless thousands of couples who have entered the Famous Blacksmiths Shop: young loves making a frantic dash in the dead of night with frenzied horsemen in hot pursuit!

The blacksmith's cottage and workshop sit virtually untouched and you can easily imagine those fleeing lovers, hands clasped tightly, awaiting the moment when the Blacksmith Priest strikes the Anvil and declares "Under the ancient rights and laws of Scotland you are now man and wife."

The past is brought to life when you enter the ancient building of the blacksmith's cottage and workshop. Passing through the narrow walls and low ceiling of this building the eerie atmosphere captivates you as you hear the voices of a frantic young couple as they make the dramatic dash over the border claiming "It must be tonight! It must be tonight!" Imagine the hopes and fears of the young elopers as they plan their daring dash: Will the marriage take place without bloodshed? Will the angry father arrive in time to stop the marriage?

Intrigued to learn more? Click on the link below!

Traditions of a Gretna Green Wedding

Take a tour of this unique and romantic building. Learn about some of the famous people who snubbed convention by marrying here. Examine letters, telegrams and even some marriage certificates of those from all walks of life who, over the years, defied relatives and friends to follow their hearts to Gretna Green. There are letters from lonely singletons looking for a partner and telegraphs from frantic parents desperate to stop a wayward daughter.

The Gretna Green Story is told through information panels translated into 7 languages (English, Japanese, French, German, Italian, Dutch and Spanish) and through a collection of memorabilia and artefacts from the hey-day of the run-away weddings. Push button displays situated along the route bring the story to life through characters from Gretna Green's past.

As you step inside you first encounter Lord Hardwicke, the English Law Lord who changed the destiny of Gretna Green with the introduction of his Marriage Bill. Learn about the dramatic changes in the English legal system that became the catalyst for creating the world's first marriage Mecca!

Within the Blacksmith's Cottage, a bedroom and sitting room are furnished in early 19th Century style, the heyday of the run-away marriages. Nearby are some of the marriage registers of the late 19th and early 20th Centuries. If you know of a family member who married here we may have a record of their marriage certificate - ask a Blacksmith Guide and they will do a search for you.

Be a little afraid as you approach the 'Repentance Stool' but be thankful that you are not the poor soul sitting upon it, listening to the wrath of the Minister, who has discovered you married in Gretna Green! All God-fearing citizens are kept on the straight and narrow path by the Parish Church!

Follow the exhibition through to the original forge and its adjacent workshop. In front of you is the original Anvil, now preserved in a glass case. Here you will also find a gallery of Blacksmith Priests, entrepreneurs the lot, who did so much to make Gretna Green a famous place. Pay special homage to the memory of the last Blacksmith Priest, Richard Rennison, pictured with his Anvil. Rennison oversaw 5147 marriages and in his regular clashes with the Church authorities, caused some irritation by pointing out his name reversed - "No Sinner"!

Now you enter the actual marriage room! Here we see the Anvil, resting on a wooden tree stump which is possibly a bog oak or elm and therefore potentially many hundreds of years old. Today's Gretna Green Wedding couples stand by this Anvil, as countless thousands have done so before, with their guests around them - or possibly only two strangers who have volunteered to be witnesses - to hear the Registrar or Minster pronounce them to be "husband and wife". 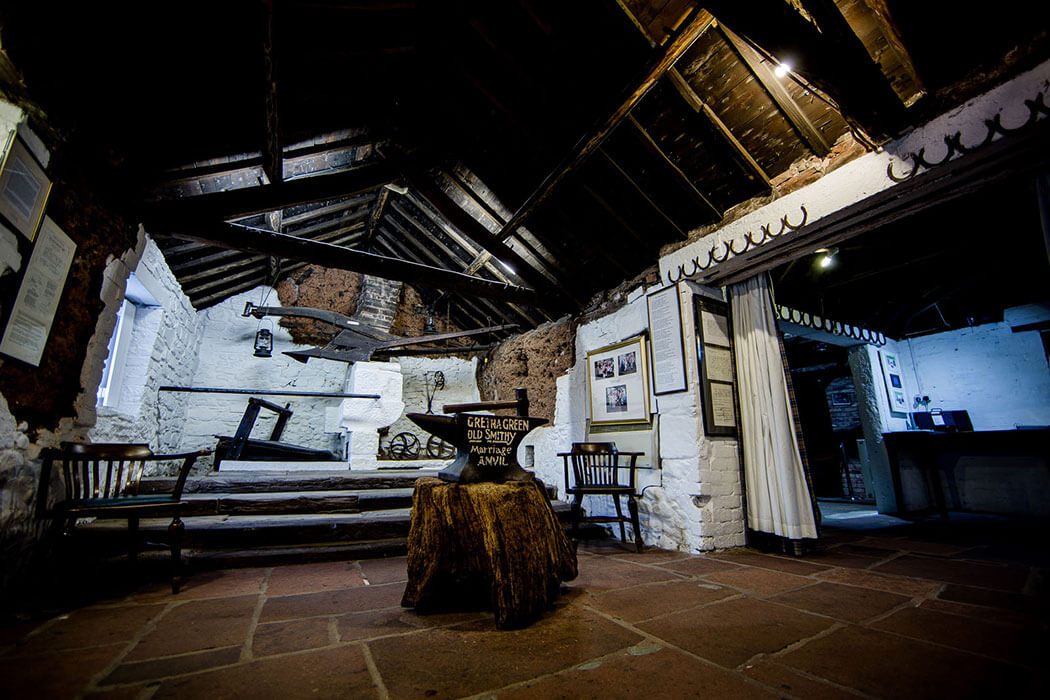 Behind the Anvil is the fire, now long cold, with its bellows where the old blacksmith of Gretna Green would have heated an iron work-piece almost to melting point, and forged it to another with hammer and anvil, never to be separated, just as he would have formally joined two loves by striking the Anvil during the regular interruptions of his day.

Passing through to the next part of the Gretna Green Story stop a moment to observe the irate father railing at his daughter for her choice of husband. The Blacksmith has already performed the marriage ceremony and the father's bullying is to no avail; the couple are in love and are now married, willing to face anyone in defence of their new status!

As history moves on, the next stage of the Gretna Green Story describes the problems faced by runaways of the 1950's and 60's as they coped with the daunting challenge of spending the legally required 21 days in Scotland. The story is completed as we bring the history of Gretna Green marriages up to date with the no Residency Act and the resurge in modern day weddings and civil partnerships. Arranging a wedding nowadays is simple and straightforward, retaining the romantic atmosphere of the past but without the ordeal that was faced by the original run-aways.

Leave this place and marvel that this small building attained its worldwide reputation because someone in London in the early 18th Century was unhappy with his daughter's choice of husband! "Steeped in history and magical charm, the ancient building of the Famous Blacksmiths Shop draws you into its romantic and often dramatic past."

Find out more about the colourful and romantic history and traditions of Gretna Green Weddings. We are situated just off the M74 just before Carlisle, with lots to do and see visiting Gretna Green can make a great day out for all the family, with plenty of places to shop and places to eat. 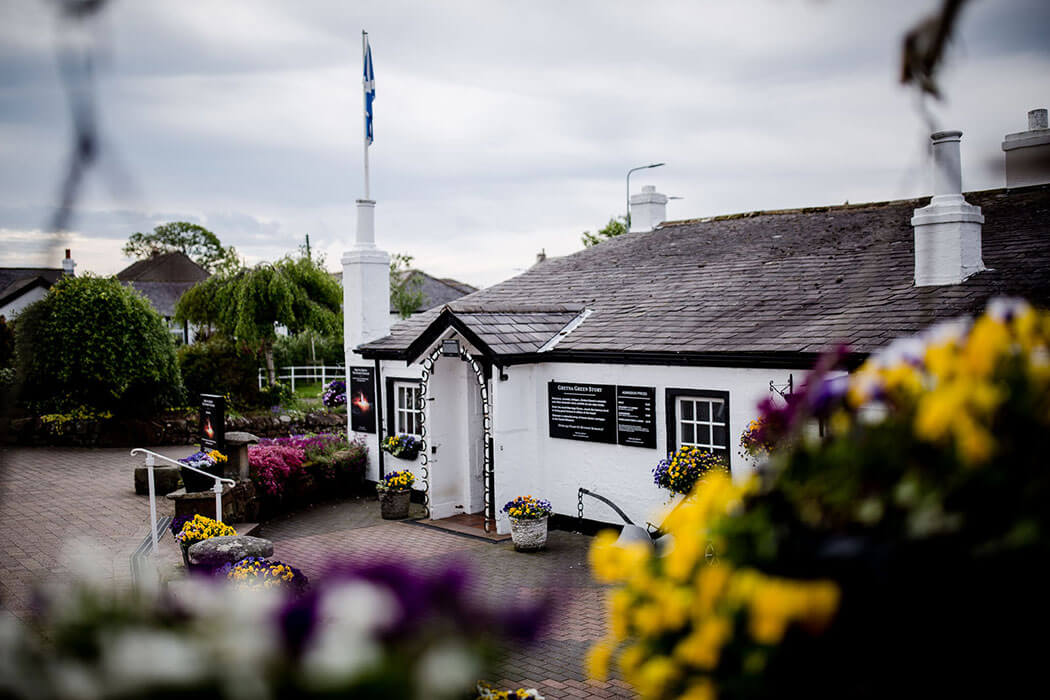